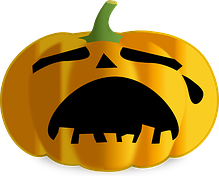 The Internet – Halloween is often among the best days of the year for many Americans, both young and somewhat young,  with the enjoyment centered around trick-or-treating for children as well as parties for the not-as-young.

The common thread  between these different ways of celebrating the holiday is the tradition of dressing up in costume, a tradition which has been horribly damaged by someone who has been described as “a real-life Muppet” and “the worst.” There have been numerous complaints about this person, including one by a 31-year-old identified as Teddy G. who was so traumatized by the encounter he could only speak in rhyming verse.

In the month of October, in a store in New York
My two arms held a costume labeled as “Mork from Ork.”
It had stripes and suspenders, as was seen on the show
Would be great for the party where I planned to go
But as I waited for checkout, almost at the cashier
I observed a small person clear his throat and draw near

He said: “You need to return this. You have to. You must.
You can’t dress like someone who’s bitten the dust
It isn’t respectful. It’s frankly obscene
It’s not the right way to observe Halloween
Just because some might laugh at Na-Nu-Na-Nu
Doesn’t make it remotely the right thing to do
Then I had to respond, so I said “Who are you?”

I didn’t want trouble, so I returned to the rack
I lifted the costume, and then I put it back
Then I got another, and returned to the line
Thinking my choice would be totally fine
But before I could buy it, who did I see?
‘Twas the Lawyrax again, sternly tapping my knee
Leading to a lost temper. I said, “Good God above!
What I have is a costume that everyone loves!

“If an elephant saw you, I’m sure it would squirm
Since this garb mocks the essence of a pachyderm
And if you’re sure that girls will find this adorable
Then you’re a basket case, ’cause the costume’s deplorable
Elephants would be offended, I’m sure, if they saw.
So put it back or I’ll fight you in a court of law.”

So the mouth on my face had an upside-down grin
Because this Halloween, I will be staying in
Since to go out sans constume means oodles of shame
At the party, I’d surely regret that I came
Yet the Lawyrax cares not for how I would feel
A costume’s a costume, shouldn’t be a big deal