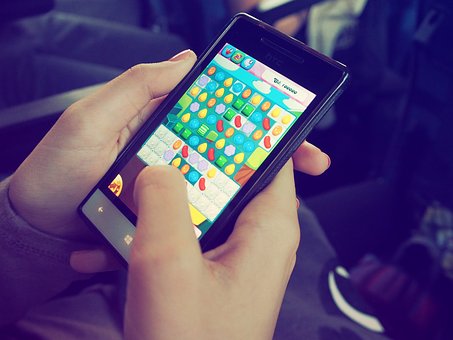 The Internet – The popular puzzle game Candy Crush Saga is now considered by the DEA to be a Schedule I drug, on the same level as heroin and PCP, and its illegal status within the United States will take effect in a year or two or maybe five. Several top drug enforcement officials have some business to take care of, and when that’s finished the game is going to be banned forever, or at least until new levels are released.

While there is no question that the game is addictive, there is considerable doubt about whether it is a drug. But it is a drug. A drug is defined, according to vague memory of the official definition of the term, as something which is not food that enters the body and affects brain chemistry. Candy Crush Saga is, of course, not a food. Despite the pervasive presence of various candies, any attempt to eat the game will result in cracked teeth and cracked screens or worse, and it has zero nutritional value. But it does enter the body. It goes directly from screen to brain and stays there, changing the brain so visions of candy combinations remain even after eyes are closed, creating urges to go back to the game even when it was time to go to sleep a while ago.

So it is a drug, but skeptics might doubt that it belongs in Schedule I, where you’d find some of the most dangerous drugs in the world and marijuana. It belongs there, however, as will be proven by the paragraphs below.

The first criterion for inclusion in Schedule I is a high potential for abuse, which certainly applies to Candy Crush Saga. It’s called Candy Crack for a reason, although it might be more accurately compared to heroin due to the way it can gradually and insidiously become such an essential part of someone’s life that they find themselves spending more and more money just to get back to that moderate high of completing another level. No matter what established drug it is most analogous to, Candy Crush Saga can easily make someone start using it so often that they start sending requests to people they barely know, on a daily basis or even more frequently, just so they can keep playing. This is a far cry from the occasional diversion which a freemium game is allegedly supposed to be.

The second criterion is that it doesn’t have any acceptable medical use. Maybe it would be acceptable for Dr. Bornstein to prescribe Candy Crush Saga to Donald Trump in order to distract him from making dangerous statements and policies, but Mr. Trump likely lacks the attention span to play long enough to get addicted. It could be prescribed for boredom, but boredom is not a clinical condition except as a manifestation of depression, and persistent losing at Candy Crush Saga could make depression worse. Additionally, getting fired due to abusing the game could lead to more boredom, so no competent doctor should be expected to prescribe Candy Crush Saga as treatment for anything.

The third criterion is that there aren’t any safety standards for medical supervision while using the drug. Of course there aren’t any such standards, because there will be no medical supervision while using the drug called Candy Crush Saga. Any medical professional asked to provide such supervision is likely to shake his or her head and go elsewhere to tend to a patient in need of tending. And then the Candy Crush user will be free to use the drug unsafely, potentially causing eye and thumb and wrist damage as well as running the risk of forgetting about important biological necessities such as eating actual food, and there are also risks associated with sending impatient people incessant requests for more lives and access to subsequent episodes. Lots of danger from a dangerous drug.

Due to the immense danger associated with Candy Crush Saga, it will eventually be controlled as tightly as heroin. Just as soon as a few people in the DEA do the things they need to do.