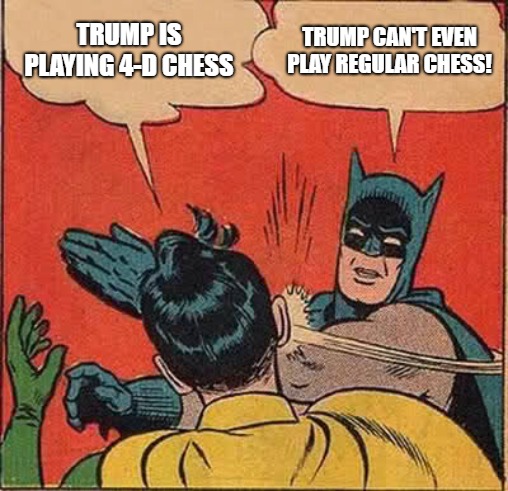 When Donald Trump makes a seemingly ridiculous statement, or takes a particularly unconventional course of action, his supporters often claim that he is playing 4-D chess. However, to be able to make the sort of moves which would be described as 4-D chess, one would think a person knows how to play regular chess. But can the president play chess?

Heck no he doesn’t play chess! Is there any game more antithetical to the president’s personality than chess? It requires intelligence, and patience, and planning skills, and being able to understand the thought processes of others, and it requires following all of the rules. It is not a very social game, and it rarely gives its players fame or a lot of money or the perks that comes with those two things. He’d much rather golf, so he does.

However, golfing on planes is impossible, so on his way to recent photo ops related to horrible tragedies, one of his staffers convinced the President to try to play chess.

At the beginning of the game, Mr. Trump tried to give away all of his pawns, saying he liked strong pieces and not these weak little ones that weren’t important and could only move a little bit at a time. Later on, he tried to use his pawns to build a wall around the king, and was upset when told he could not move them sideways or backwards and there would be no wall.

When he first learned about the queen’s diagonal movement, the president was pleased, likening it to “Crooked Hillary.” However, he became less pleased when he found out the queen was the most powerful piece on the board. This led him to place his queen directly in front of an opposing rook so he could “lock her up.”

The president also had trouble with the rule about the king only being allowed to move one space. He said the king was the most important one there and should be able to go wherever he wanted to. He could even go to El Paso even though the community specifically asked him not to come, so why wasn’t he allowed to move where he wanted to? No one told Trump he wasn’t the king.

Unsurprisingly, the president insisted on playing the white side, and made many disparaging remarks about the other pieces. He said his staffer’s pieces were muslims and were banned from going to the president’s side of the board. He said they were illegal immigrants and needed to be deported, and he tried to make his pawns fly around the board like they were ICE agents. Things were said which cannot be printed here, but those things did not offend his staffers because if they were offended by such things they would not work for Trump at this point.

Eventually, the president’s king had no way to avoid being taken, but Trump would not admit defeat. He said he was “treated very unfairly” and that that the staffer’s strategy was “not nice” and “Chairman Kim would never have done that.” The president then told the staffer that he was fired and asked another staffer for a cheeseberder.